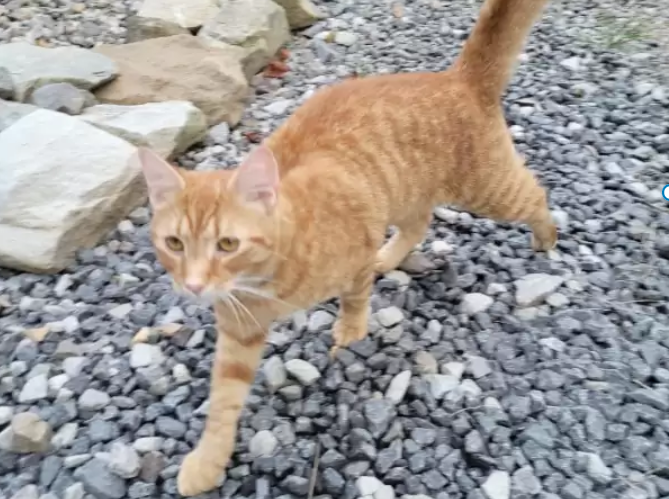 What the boy didn’t know was that Oliver was on his way — trekking almost 40 miles so they could be reunited.

The Kutscher family was recently getting ready to move from their home in Bridgeport, West Virginia, to Morgantown when they realized their cat had disappeared. After a thorough search, they made the difficult decision to leave without him, vowing to return to Bridgeport and look.

“We knew that we had some time to keep coming back to the old house to look for him, so we were still hopeful,” Kutscher told The Dodo. “We would go back every weekend.”

But each time the family returned, Oliver was nowhere to be found.

“Everytime we left without a sign of him, my son … would cry relentlessly,” Kutscher said. “It was heartbreaking to watch.”

When the Kutschers finally sold their house, their hope began to dwindle. They prepared for a difficult conversation with their son, where they’d tell him the heartbreaking news that Oliver was probably gone.

“His dad and I did not think we would have to deal with the loss of a pet at such an early age,” Kutscher said.

And then, out of nowhere, a familiar set of ears appeared in their yard.

Unbelievably, Oliver had found them.

“He was just staring up at us,” Kutscher said. “I scooped him right up in my arms … as soon as we got inside, I dropped to my knees and just held him sobbing. He stayed right there with me as the rest of the family and pets gathered around him.”

Later, a microchip scan at the vet confirmed what the family already knew — Oliver had miraculously found his way home, all by himself.

Though he had been through so much, Oliver was just the same.

“He wasn’t scared or timid or anything,” Kutscher said. “He just looked content and happy to be home, and tired.”

Now safe in his new home, Oliver can finally relax after such a long journey. His family might never know how their cunning cat found them, but they’re so happy he did.