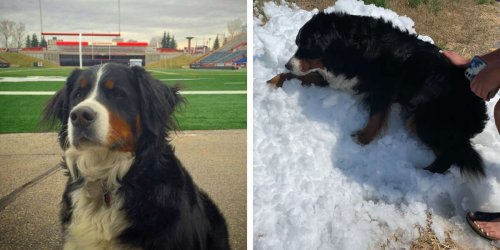 For more than a decade, this sweet dog named Brooke got to bask in the love and affection of her adoring family. But in her final days, Brooke came to know the love of a whole community, as well.

This week, Brooke’s owner, Reddit user Canadianbuilt, took to his local Calgary-based subreddit to make a sad announcement — and an earnest appeal. He’d just learned from Brooke’s vet that she was terminally ill, and he wanted her to experience one of her favorite joys one last time: rolling in the snow.

Being summer, there was no snow on the ground to be found nearby. So Canadianbuilt hoped a local indoor ice rink might be able to help.

The heartfelt post inspired dozens of commenters to send well-wishes and suggestions for where Brooke’s family might go to find snow (or, more accurately, ice shaved off an ice rink’s surface). Among those who saw it was the staff at a community-run ice rink, Bowness Sportsplex.

Learning of Brooke’s situation, they leapt into action:

“[They] immediately started piling snow outside for us,” Canadianbuilt wrote in an update on his post.

It was all for Brooke. Her family drove with her to the spot and, thanks to the community’s kindness, she was able to feel the coolness of snow against her fur, face and paws one more time.

This was to be, bittersweetly, among her final acts:

“After we got back from laying on the snow, my girlfriend carried her out of the truck and onto the lawn on the front yard where it was nice and shady, and she loved to hang out so much,” Canadianbuilt wrote. “She laid there for a few hours while we said our goodbyes, and she gave us kisses, and then she went. I cried like I’ve never cried before […]”

Good dogs like Brooke have a remarkable way of bringing happiness to the hearts of all who know them — and even to people they haven’t yet met. So, in some ways, by giving her snow in winter, the community’s kind gesture was simply a way of following her lead.

It’s something her family will surely remember forever.

“Rest well, Brooke,” her owner wrote. “We won’t forget you.”