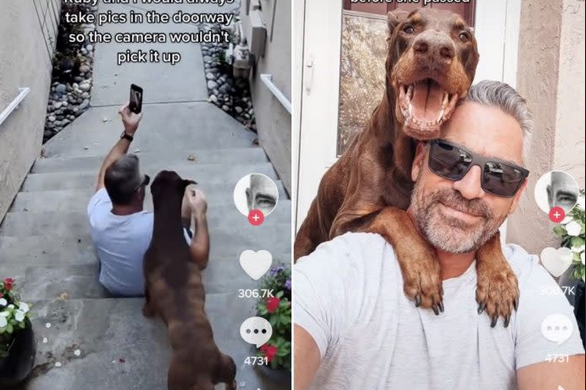 A dog owner mourning the loss of his Doberman discovered Ring footage of one of their last moments together.

The TikTok account @rubydooby_do was all about Ruby the dog. But on Aug. 2, the beloved canine lost her battle to dilated cardiomyopathy (DCM), a heart condition that largely affects Dobermans. Losing a furry friend is never easy. When Ruby’s owner found Ring footage of them together, he said it was something he would always “cherish.”

“This Ring video means so much to me. Ruby and I would always take pics in the doorway so the camera wouldn’t pick it up. For some reason, I decided to take pics on the steps instead,” the video text read.

@rubydooby_do This @ring video will be cherished forever. Its our last selfie together and the only behind the scenes video I have of our selfies. Love that pup♥️#ringvideo #doberman #rubydooby_do #petsoftiktok #dobermann ♬ Memories – Maroon 5

The instinct, in retrospect, was uncanny. Four days later, Ruby passed away.

“It’s our last selfie together,” the video caption continued. “The smile and that nub wag she had will be with me forever. The pain of not having her is still with us but seeing that beautiful smile definitely helps with the pain.”

The Ring footage showed Ruby happily hopping on the back of the pet owner, who was sitting on the steps. She seemed to know how to pose perfectly with him.

The dog owner explained in the caption that this was their last selfie together — and the only “behind the scenes video I have of our selfies.”

The emotional video racked up 1.8 million views on TikTok.

“Sorry for your loss. I’m so happy you have such a beautiful moment caught on video forever,” a person commented.

“I love the pure, beautiful love between you and Ruby,” another said.

“The smile on her face says it all,” someone wrote.