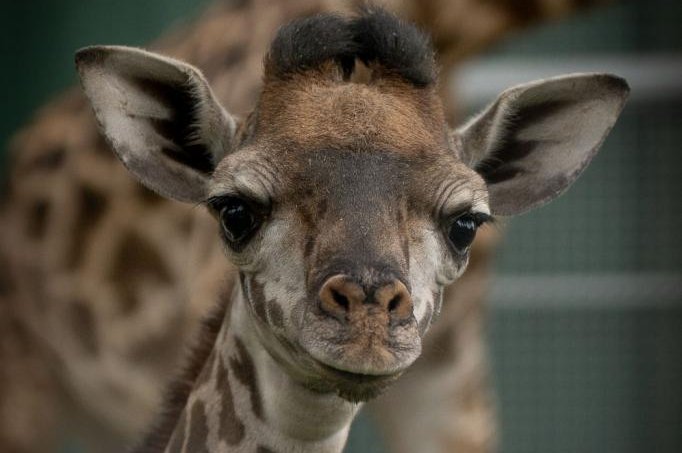 An Ohio zoo is heralding a new arrival to their ranks — a new endangered giraffe, born at the zoo last week.

The male Masai giraffe was born at the Columbus Zoo last Wednesday to mom Zuri after a 15-month gestation period, according to a press release from zoo officials.

The still-unnamed baby boy is being provided time to bond with his mom, and is not yet on public display.

However, an exam given the day after his birth found that the calf “seems to be healthy and well fed,” the zoo said, and was seen standing and nursing soon after being born.

Zuri, the 12-year-old giraffe mom, arrived at the Columbus Zoo in 2013 after bouncing around a number of wildlife centers, and has also given birth to another calf, Ralph, in 2020.

They join another pair of calves, Sammie and Schaefer, who arrived in 2021 to a different mother.

All four babies were bred by father Enzi, who sadly had to be humanely euthanized last year due to “chronic and deteriorating health issues that were not responding to treatment,” the zoo said.

“We are always thrilled to welcome the birth of a giraffe. Twenty-two giraffes have been born at the Columbus Zoo over the course of our history, but this latest birth — our 23rd — is particularly special,” said Shannon Borders, curator of the Heart of Africa region at the Columbus Zoo. “We were heartbroken to lose Enzi, and this calf is such an amazing gift to us and to the future of all Masai giraffes. This little one is truly our miracle baby, and it warms our hearts that Enzi’s legacy continues to live on to have such a positive impact.”

Zuri and Enzi were paired together as part of a breeding program designed by the Association of Zoos and Aquariums (AZA) to promote new births among endangered species.

While all giraffes are threatened in some form, Masai giraffes are listed as endangered by the International Union for Conservation of Nature (IUCN), with the organization estimating that the total population has fallen by 50% over the last three decades.

It is estimated that there are only 35,000 Masai giraffes left in the wild due to numerous factors, including habitat loss, civil and military unrest, and poaching, the IUCN said.

However, efforts to promote breeding among the giraffes have been positive, and the Columbus Zoo said that it has raised over $279,000 for giraffes in the last decade.

Additionally, the zoo is a co-founder of the giraffe plasma bank, which works to collect plasma for animals that may be in need of a future transfusion.

These transfusions have been responsible for saving a number of giraffes across the country, the zoo said.

“From our successful giraffe breeding program, contributions to field conservation projects, and leadership in Animal Health initiatives benefiting giraffes, we are fully committed to making a difference for Masai giraffes and other species that rely on their place in nature,” said Columbus Zoo president Tom Schmid. “None of this would be possible without the support of our community, and we are grateful and proud to be able to help provide our community with a connection to nature so that together we can make a global impact.”