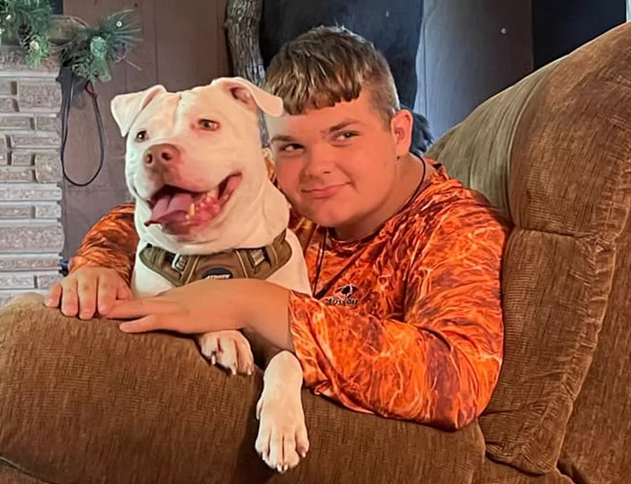 A deaf dog named Dave has found his perfect home.

The 6-year-old pit bull mix recently participated in an Empty the Shelters event in Michigan organized by the BISSELL Pet Foundation. At the event, Dave represented his shelter Humane Society of Midland County (HSMC) — the dog’s home after rescuers found him roaming the streets of Grand Rapids.

While some 29,000 pets found homes during the reduced-fee Empty the Shelters event, Dave sadly wasn’t one of them.

Dave returned to HSMC and continued to wait for his adopter. The canine didn’t have to be patient for long. Shortly after the event, 14-year-old Walker Cousineau saw Dave’s photo on Facebook and decided he had to bring the pooch home.

“[Walker] walked in and said, ‘We have to go to Midland; I have a dog there!” Mindy Cousineau, Walker’s mother, told The Daily Paws. “‘There’s a deaf dog there, and he has to be mine!'” Courtesy of Bissell Pet Foundation

Once Walker and Mindy arrived at HSMC, it was clear that Dave felt the same way.

“Dave went right up to Walker,” Mindy added to the outlet. “We knew we weren’t leaving without him.”

Mindy told PEOPLE that when Walker gets overwhelmed and starts to melt down, “Dave will just walk right up to him, and it calms Walker down.”

Dave, who is deaf, is also helping Walker navigate his gradual hearing loss. Walker started to lose his hearing four years ago due to Alport syndrome, a rare genetic disorder affecting the eyes, kidneys, and inner ear.