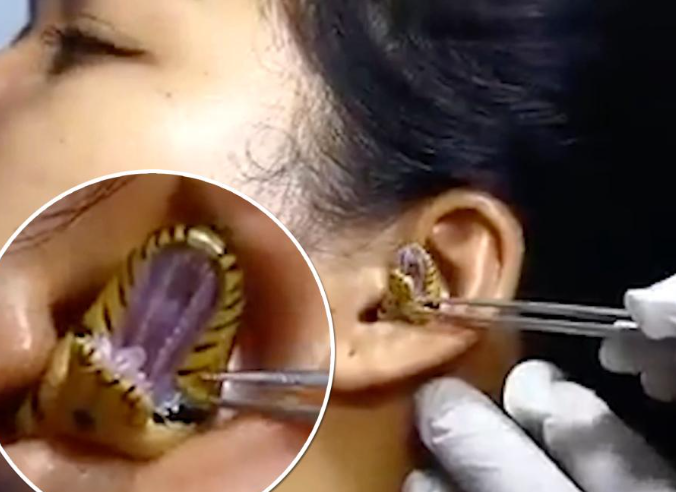 Alarming footage showed the moment a “surgeon” unsuccessfully tried to extract a live snake from a woman’s ear.

Alarming footage showed the moment a “surgeon” unsuccessfully tried to extract a live snake from a woman’s ear. A video of the attempted surgery, with squirming footage, has received more than 125,000 views as people debate whether it is real.

“The snake has gone in the ear,” reads the caption of the strange Facebook video. Indian social media celebrity Chandan Singh uploaded it to his 20,126 followers on Sept. 1. However, it’s unclear where, when, or how the incident occurred.

In the nearly four-minute film, an alleged doctor is seen using tweezers in a last-ditch effort to remove a black and yellow reptile that’s emerging from a female patient’s ear. Unfortunately, despite the multitude of instruments including forceps to Q-tips, he fails to dislodge the snake from its unusual position.

The now-viral clip ends without revealing whether or not the snake extraction surgery was successful. It’s leaving viewers shocked and disappointed. “He looks like a bogus doctor,” observed one skeptical Facebook commenter. “That’s why he’s pulling off so many tricks.” Another commenter suggested a different professional get the serpent out. “Instead of a doctor, a snake charmer would have extracted the snake,” they joked.

Some viewers are questioning if the snake is real

While some viewers were doubtful, others felt the video was too fantastic to be true, with one person remarking that it was “100% false.” One viewer wondered how the rest of its body could fit inside her ear canal when another asked why it didn’t simply crawl into her ear like a normal snake. One skeptic observed that the snake’s head poked out headfirst because this would imply that it had crawled into her ear and then turned around in such a tiny area.

Of course, critters like snakes lodging into unwanted spaces are nothing new. In January, a man from New Zealand lived a bug hater’s worst nightmare. A cockroach infiltrated his ear and stayed there for three days, according to The New York Post. Even after he went to the doctor, he was told he had water in his ear and was given antibiotics. Finally, he went to a specialist that extracted the bug… int two parts.

A tourist in Puerto Rico likely wished she had a snake in her ear. Instead, she ended up with a crab lodged in her ear. In a viral video shared on TikTok, a woman can be seen getting a more professional ear extraction. A medical professional probes her ear on a beach in San Juan. The crab is not only removed but survives the ordeal. It’s seen scuttling away on the beach, to find another ear.