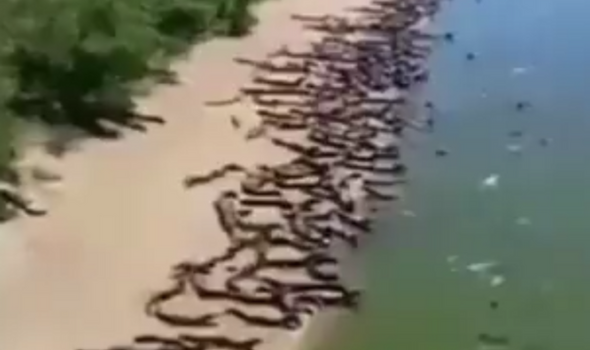 The video clip of an estimated 700 crocodiles spread out across a long stretch of a Brazilian beach has been going viral.

The invasion is said to of sent locals around the area running, as people avoid the beach due to the intense pile-up of the deadly species. It is currently still unknown why a large amount of the reptile species has congregated on that particular beach, and it is still unknown how long they will remain there.

Crocodiles have been known to attack people when they inhabit certain bodies of water, so the locals have stayed at a safe distance.

The video footage shows hundred of the deadly species piled up across the beach.

Some of the reptiles can be seen frolicking in the water, spread out across the long stretch.

And other crocodiles remain clumped together on the edge of the water, on the sandbanks of the beach.

No people can be seen in the video clip only a male voice can be heard speaking Portuguese, and the video was most likely shot from a safe distance.

It is still unknown why the crocodiles have congregated on the beach, and how long they will remain located there.

A invasion of crocodiles swarm a beach in Brazil (Image: (@RAF_Valerie)

Users on social media have been reacting to the clip of the crocodile beach invasion.

@Andre_Bida said: “This not a beach, neither an invasion. It is just a beautiful view of Brazilian caymans in their natural habitat, at Nabileque River, as seen from MS-195 road, in the middle of “Pantanal” wetlands. Local human population: 0. In panic: 1 radio broadcaster from LA.”

@Erin_MMG said: “News flash: we aren’t the only species on the planet.”

@N_e_v_i_n said: “Are there enough prey items for all of them or are they cannibalistic?”

@Isces1 said: “Whenever animals “invade” a space I always figure it’s because humans messed up theirs so.”

@BigBoss007 said: “It’s something more to this. What’s in the water?? There’s no way all of them are at bay like that.”

@Manustocks said: “Those are caimans not crocodiles.”

@Airetam97 said “These are yacare caiman, and like other crocodilians, they’re ectothermic, or “cold-blooded”. To raise their body temperature, they venture onto land, exposing themselves to direct sunlight. Additionally, this isn’t a coastal beach, as shown in longer versions of the video.”

There has been much dispute online as to what species of animal has washed up on the Brazilian beach.

Some users are claiming that they are crocodiles, whilst others believe they are caimans, a species closely connected to allegators.