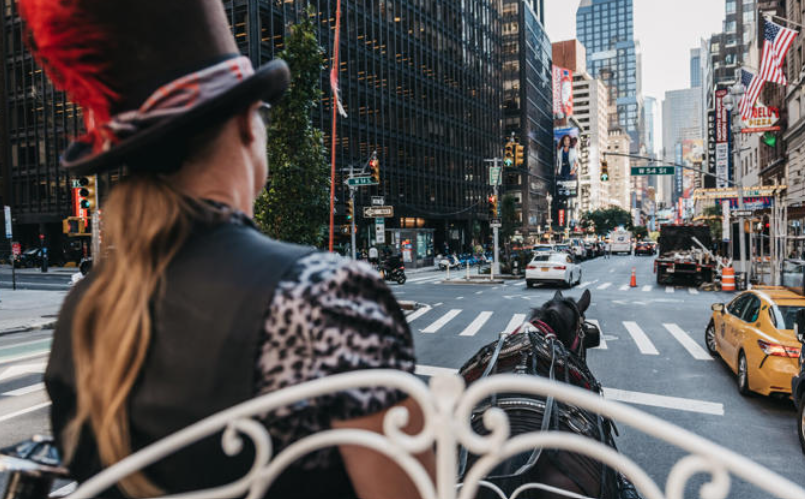 Horrified onlookers gathered last month around a fallen carriage horse where it had collapsed on a street in Midtown Manhattan. As the horse’s driver frantically tried to rouse it — and police officers sprayed it with hoses to cool it down — the crowd captured the moment with cellphones.

Video of the horse, thin and prone on the pavement, has now reignited calls from residents, celebrities and politicians to ban the horse-drawn carriage industry which has existed in New York City for more than 150 years.

The Manhattan district attorney is investigating the incident, and a bill before the City Council would replace the carriages with electric versions.

Eighty miles north and a world away from Manhattan, the fallen horse, named Ryder, is recuperating at a grassy farm, with a little goat for company. It is a quiet retirement for an animal who may have set in motion the end of a way of life for scores of drivers or — depending on whom you ask — the liberation of nearly 200 of his equine peers.

Existential battles are not new for the city’s tourism carriage industry, which takes visitors on rides through Central Park for about $165 an hour. It has weathered them all, from Mayor Bill de Blasio’s unmet campaign promise to ban it “on day one” of his administration, all the way back to 1866 when the American Society for the Prevention of Cruelty to Animals was established — its founder inspired by the abuse of carriage horses.

But today’s threats seem potent: a public losing its taste for working animals, from circuses to rodeo, and an urbanized audience unfamiliar with the realities of large animal husbandry. Even those who might admire the big horses cocking a hoof on 59th Street are armed with recording devices that can amplify the sight of a colicky or spooked horse — conditions experts say can befall any equine, whether in a pasture or on a city street — into the stratosphere.

Detractors say the industry is inherently exploitative and abusive, bent on evading the city’s many regulations designed to keep horses safe, though the number of recorded violations appears relatively small. They say carriages are outmoded, urging New York to join Chicago, Montreal and several other cities that have banned them.

“Anyone with a heart can see that these horses are abused and suffering,” said Councilman Robert F. Holden, a Democrat from Queens who introduced the bill to replace horse carriages with electric versions. “This is one more barbaric trend that we are doing now that should be eliminated.”

Drivers and their supporters insist that they care for their animals, on whom their livelihood depends. They say there are just a handful of accidents and illnesses each year — and that they are unavoidable, even within a highly regulated industry.

Christina Hansen, a spokeswoman for the carriage industry, says the notion that horses don’t belong among cars and buildings is misguided. “People have forgotten what horses are like, what they are capable of,” said Ms. Hansen, who drives three horses stabled in Manhattan.

“We are doing more than just giving people nice rides in Central Park,” she added. “We are this living connection to humanity’s partnership with horses.”

Up on the second and third floors of a low brick building on West 52nd Street live about 90 of the city’s carriage horses. It is one of three such stables in New York, all on Manhattan’s West Side. Inside, it could pass for many other barns, except for the rubber-covered ramp the animals must climb to access each floor of stalls. “In nature, it’s called a ‘hill,’” Ms. Hansen said on a recent tour, responding to criticism that walking up the incline is unnatural for horses.

Indeed, the Manhattan barns appear tidier and better equipped than many pastoral stables: Electric fans aimed at the stalled horses whir overhead, and automatic waterers refill each trough. It is mucked and swept by rotating shifts of stablehands on a 24-hour schedule.

What troubles animal welfare advocates is what the stables lack: anywhere for the horses to run free. While the city mandates each animal have five weeks of vacation a year, at their urban home base there are no pastures or paddocks, known as “turnout,” for these horses.

“They are deprived of everything that would add any enrichment or joy to their lives,” said Ashley Byrne, a spokeswoman for People for the Ethical Treatment of Animals.

Supporters of the carriage industry disagree: “It’s anthropomorphizing,” said Dr. Joseph Bertone, a veterinarian who in 2015 conducted a study that compared stress levels in a group of Manhattan carriage horses and their counterparts on city-mandated vacation. The study, which Dr. Bertone, then a professor of equine medicine at the Western University College of Veterinary Medicine in California, said was independently funded, showed that the horses in their Midtown stalls evinced fewer chemical signs of stress than those in the unfamiliar agrarian setting of vacation.

“People in cities think that they are a wild animal, and they are not,” Dr. Bertone said in an interview. “They are very used to that lifestyle, and with habituation they are very happy.”

‘You don’t know how it hurts’

Drivers, who are often independent contractors employed by the horses’ owners, typically rotate two or more horses to pull the city’s 68 carriages. They are subject to horse welfare rules that are stricter than in many other equine pursuits, dictating how long shifts may last, when it’s too hot, humid or cold to work, and even what sort of blanket the animals must wear when it’s chilly. Violations are subject to fines and may result in the suspension or revocation of a horse-drawn cabdriver’s license.

Data from the city’s Department of Consumer and Worker Protection, which licenses carriages, shows that between about 2013 and 2017, the last period for which the information was available, about two dozen drivers were charged with violations. A few involved issues such as carrying more than the limit of four passengers, but most concerned overcharging customers, or issues with paperwork, like failing to fill out a daily log.

One incident, in 2014, involved a driver working a limping horse. He was fined and sentenced to community service, according to court records. His license was revoked and has not been restored, according to the city’s consumer protection department.

The industry is also overseen by five agencies, including the New York City Police Department and Department of Health and Mental Hygiene; neither agency was able to provide comprehensive, up-to-date data on violations by publication time. But a trove of inspection records from 2018 appear to show broad compliance.

How many horses are injured or fall ill while working is impossible to know; there is no reporting requirement for the horses’ owners.

“We don’t even know the extent of incidents that have happened,” said Edita Birnkrant, the executive director of New Yorkers for Clean, Livable, and Safe Streets, or NYCLASS, an advocacy organization that seeks to enact reforms and ultimately end the city’s carriage horse industry.

In June, according to NYCLASS, which gathers incident information from news reports as well as bystanders, a gelding named Freddy spooked and ran into traffic. In May, a mare named Luciana collapsed in the park, the group said. Over the summer, a horse named Billy died in his Midtown stables. The cause was colic, according to the city health department, a common and frequently fatal equine ailment.

In the wake of Ryder’s accident, the carriage horse industry itself has called upon the city to step up oversight. Its requests include a full-time city equine veterinarian, updated rules and training for drivers, and the creation of a carriage horse stable inside Central Park.

Up on the second floor of the Clinton Park Stables on West 52nd Street Ariel Fintzi, who has operated a carriage for over 30 years, becomes emotional when he hears accusations of neglect.

“You don’t know how it hurts, what it means to call us abusers,” said Mr. Fintzi, 67. “Day in and day out we are with our horses. How dare you!”

Horses After the Carriage

In her box stall on 52nd Street, Mr. Fintzi’s shaggy draft horse Stella, a Chicago carriage horse until that city banned the practice in 2020, nibbled hay on a recent afternoon. Etched into the keratin of one hoof was her New York City license number, issued by the city’s department of health. Stella is 15 years old, according to her owner; city rules say horses may work from the age of 5 and must be retired by 27.

Carriage horse owners insist every effort is made to care for the animals in retirement or place them in new permanent homes. But their opponents point to cases like that of Bobby II Freedom, a horse found by an activist in an online auction in 2010 where some bidders purchase horses to ship to slaughter.

Bobby was identified as a former Manhattan carriage horse by the numbers engraved in his hoof. “You can’t say you love horses and then just get rid of them that way,” said Susan Wagner, the founder of Equine Advocates, an advocacy organization, who kept Bobby at her equine sanctuary in Valatie, N.Y., until he passed away this spring.

The industry this month unveiled a plan to formalize horse retirement, but did not specify how it would be implemented or funded.

After Ryder’s collapse in August, a veterinarian diagnosed the horse as showing signs of a neurological disorder, according to the union. Since then, the Transport Workers Union Local 100, which represents the industry, has instituted bimonthly veterinary visits to its largest stable on 52nd Street and brought in a veterinarian to teach drivers equine first aid and how to spot common ailments.

“What happened was a horrible thing,” said the woman who adopted Ryder after his fall and boards furloughed carriage horses at her farm. She asked that her name not be used because she has been the target of anti-carriage horse attacks online. “But it doesn’t mean every carriage driver is wrong, or every carriage horse is abused.”