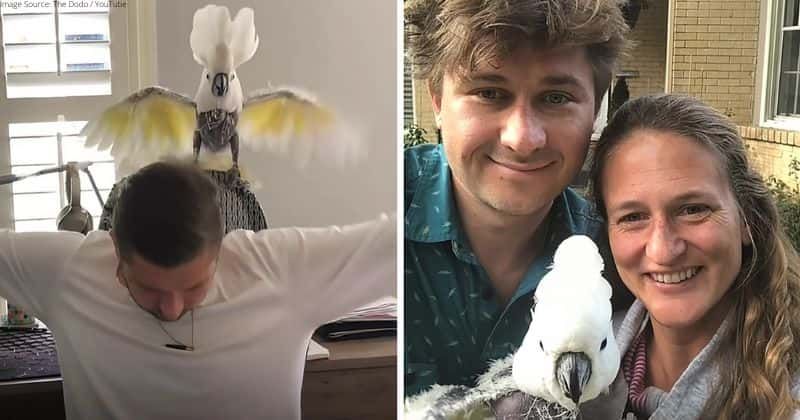 Misha and Kristin adopted Audrey the cockatoo when she was depressed. With a little affection and a lot of dancing, she has found her joy again.

Misha and Kristin recently adopted a cockatoo named Audrey from an 85-year-old woman who had just lost her husband. The experience had taken a toll on Audrey, who had plucked out her own feathers. Apparently, the cockatoo had depression. Audrey only had a few feathers remaining on her head and tail, and a few feathers at the ends of her wings. The second time the couple met her, she jumped right into Misha’s arms. Moved by the affection, Misha decided to adopt the little bird.

When he first asked Kristin if it would be OK if they adopted Audrey, his partner was a little overwhelmed. The couple already had a dog and the idea of another pet joining the family was a little intimidating. Nonetheless, she agreed. When Misha took the cockatoo home, the bird instantly bonded with him. She would quietly sit beside him as he worked away on his computer. Soon enough, Kristin and Audrey grew closer to each other as well. Although it took a couple of weeks, Kristin was able to hold and pet the bird. As time went on, Audrey would even snuggle up to her and kiss her.

The bird particularly enjoyed doing Kristin’s hair, which the couple pointed to as the turning point in the relationship Audrey shared with her. A few weeks later, Misha happened to be playing music at home. Almost instantly, Audrey began to sing along to the music. She would even sway as the music played, mimicking Misha’s movements. At first, Kristin could not believe birds could enjoy music in the way that Audrey did. Nonetheless, the adorable exchange filled the couple’s day with happiness. They then began playing music for the cockatoo every single day.

Slowly but surely, her demeanor began to change. She was happier. Most notably, Audrey grew new feathers every day, much to Misha and Kristin’s joy. They documented the bird’s journey out of depression in daily clips, compiling them for everyone to enjoy after she had grown a totally new coat of feathers. In the video, her complete transformation is evident; at first, Audrey is reserved and doubtful. Not long after, she becomes more expressive with her excitement. Social media users have thoroughly enjoyed witnessing her transformation, noting how important it is for all living beings to experience happiness. One Reddit user, for instance, joked, “This bird dances better than I do.” Others commented on how they were unaware birds could also self-harm. Another user explained, “Sometimes [birds] also get anxiety, frustration, or depression from poor social interaction/stimulation and will pluck their feathers as an outlet, kind of like a form of self-harm.”