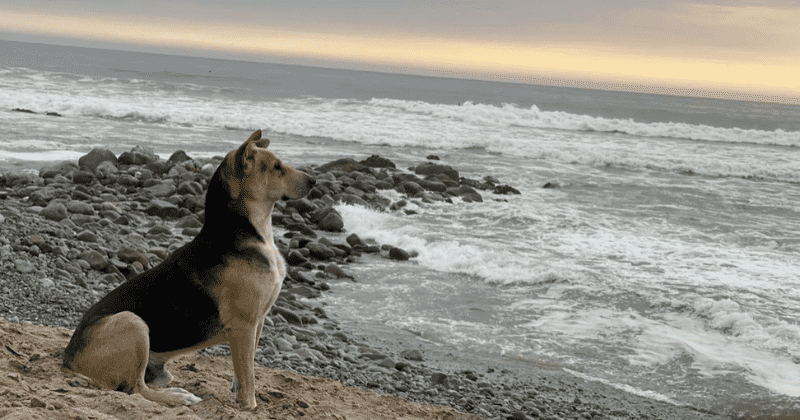 We’ve heard a million stories about the incredible bond between a dog and its human, and every time these tales leave us marveling over the immeasurable love and commitment in such relationships. A Twitter user recently called the internet’s attention to one such bond after coming across a dog waiting on the shores of a Peruvian beach, waiting for his fisherman owner to return. The reason behind his waiting turning out to be equally wholesome and heartbreaking, reports The Daily Mail.

Jolie Mejía noticed the dog—known as “Vaguito” among locals in the Lima coastal district of Punta Negra—as she and her family were out on a walk on the beach. She first assumed Vaguito, who still had his collar on, had been left behind by his owner and that she would simply keep him company until they returned. “He didn’t seem abandoned, he was clean, so I petted him waiting for its owner, but minutes passed and no one came,” Mejía shared.

A Punta Negra resident approached her after some time and filled her in on Vaguito’s tragic backstory. Mejía said, “He told us that the animal lived with a fisherman who passed away a long time ago. And that, since then, the dog comes here every day and looks at the sea.” According to Mejía, Vaguito was taken in by a local woman when his owner died and that other members of the local community also assist with his care.

She said, “I have a dog at home. I love dogs in general. His story really touched my heart.” By the end of the day, Mejía and her family had parted ways with Vaguito, who had his eyes still set out to sea. Mejía told Dodo, “We were very moved.”

Dogs are smart and another story of a pup reuniting with his owner proves that. Rosie, a Border Collie who likes “chasing squirrels” and “fetching balls,” was out on a walk with her owner Steve Harper, 68, at 4 p.m. on November 4 when they heard a loud crash. The rescue dog ran away from her human after being spooked by fireworks, but the astute canine swiftly “handed herself in” to a neighboring police station.

Julie, Steve’s wife, was at home and unaware that 10-year-old Rosie had gone missing, but she was unable to be contacted on her mobile phone despite Steve’s best attempts. Leicestershire Police released a video clip from the department’s CCTV camera in which Rosie can be seen walking around the police station’s entrance before sitting down near the doors.

The surprised officers checked Rosie’s collar, which had her owner’s name and phone number, and then contacted Steve to let him know Rosie was safe. As she waited for a ride home, the black and white puppy drank some water and soaked up all the staff’s hugs. Julie said, “I was so pleased and so happy she was safe and so proud of her that she was clever enough to find her way to the police station.”