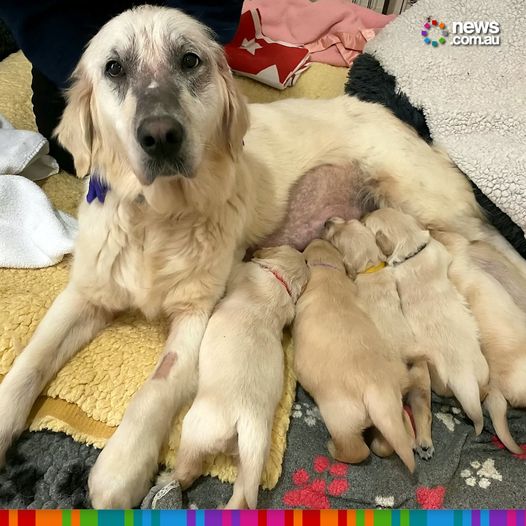 A pregnant golden retriever suffering from sarcoptic mange was abandoned in the field and had to survive on her own for days. She was starving and bleeding from scratching herself. Thankfully, she was spotted before it was too late.

After the challenging treatments and thanks to the dedication of her careers, she has found a loving home just in time for Christmas.

Dumped and scared of people

Four-year-old golden retriever Amber was found by a dog walker in a field in Buckinghamshire, England. She was scared of humans and wasn’t letting anyone close until she eventually became exhausted and accepted help.

Amber was rushed to the vet who diagnosed her with a heartbreaking condition: sarcoptic mange. The pooch was suffering from bleeding induced by her scratching and biting her itchy skin. What is more, the poor pup was heavily pregnant.

The dog was transferred to the Blue Cross pet charity’s centre in Burford, Oxfordshire. They believe that she had been used for ‘backyard breeding’ and dumped when her owners knew they would need to pay for veterinary intervention to deliver her large litter.

Thanks to the much-needed vet care and despite the puppies’ heart rates beginning to drop in the womb, Amber successfully delivered eight tiny pooches by emergency C-section.

As she was too weak and stressed to feed all her babies, the charity stepped in to ensure they survived.

Blue Cross said it ‘was touch and go’ for all nine dogs but Amber started to slowly improve and she and her pups also began to thrive.

Luckily, all puppies have now found new homes. It was time for Amber to become a part of a loving family before Christmas.

After losing their 12-year-old golden retriever Henry in May this year, Elly Griffith and her husband Adam turned to Blue Cross to adopt a new companion for their other dog Stanley.

When me and my two kids went to visit her, we just fell in love with her. She is so calm, sweet, and relaxed. I don’t know how but she is so good with people despite the horrible neglect she has had. She still trusts people and is so sweet and welcomed us straight away.

The resilient pooch settled down into her new home brilliantly. She enjoys the great outdoors and is always keen to join her humans on their way to the woods.

There are so many dogs out there like Amber that haven’t been so lucky. We really want to spoil Amber this Christmas. The kids love her, they love playing in the garden with her and we are all very excited for her first Christmas with us.