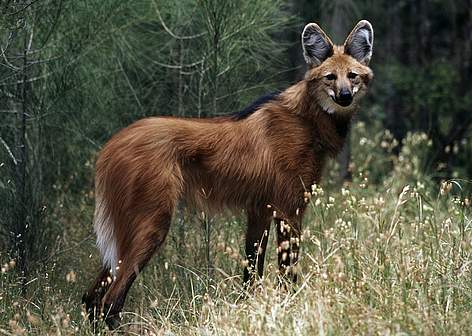 What has the legs of a deer, coat of a fox and face of a wolf? This isn’t a riddle – this is what netizens were asking themselves when a video of this strange, hybrid creature waltzed across an empty street surfaced.

The video surfaced on Twitter from an influencer named Reg Saddler, who often posts amazing and puzzling wildlife clips. This one, in particular, had the influencer and watchers scratching their heads trying to figure out what creature this could be.

Some folks even believed that the video was a hoax, pointing out that the animal’s black mane seemed to disappear and reappear in the grainy clip, but really, this could just be the result of a low-res camera. The mane only evades the screen when the animal raises its shoulder blade, and from a distance with a zoomed-in lens, the fur could very easily blink in and out as it moves.

Meet the Maned Wolf – Not a Wolf, Fox or Deer

Ironically, this strange canine’s coat is its namesake. Not a wolf, fox or a deer, the maned wolf is a completely different genus in the Canidae family known as Chrysocyon. They tend to be three feet high at the shoulder with long legs that help them step over tall grasses. According to the Smithsonian National Zoo, maned wolves are common in northern Argentina, South and Central Brazil, Paraguay, Bolivia, and southern Peru.

Typically pretty harmless to humans, a maned wolf’s diet mostly consists of small animals and plants. So, it’s not surprising that this canine kept walking past the spectator without hesitation. Likely, this one was roaming the area in search of another food source, unbothered by the human audience.

Even as the largest canine in its native region, the maned wolf still faces an encroaching threat. Right now, the species is on the Near Threatened list as urbanization destroys more of its habitats. With fewer maned wolves, local communities may see pest populations run out of control.

Does anyone know what the heck this is?!
🎥 via Imgur pic.twitter.com/FwBBJCfgb6