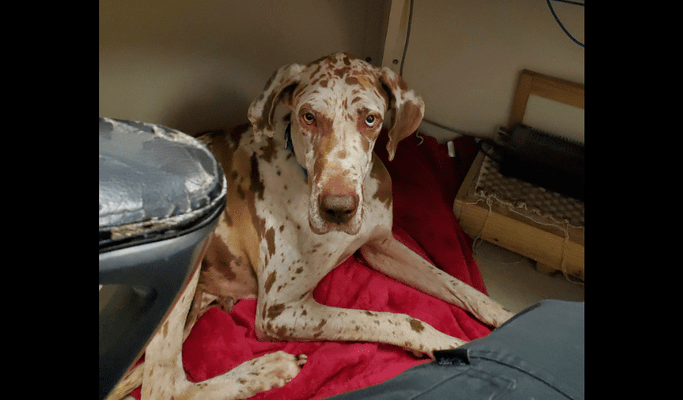 A brown-speckled Great Dane’s months-long journey started on an uninhabited island and ended on a cozy couch in Michigan, according to an animal shelter.

The 2-year-old dog, Zaria, went missing from Harrison on Aug. 17, the Clare County Animal Shelter posted on Facebook at the time. Zaria was described as “very friendly but hats scare her.”

Somehow the Great Dane became stranded on an island at Cranberry Lake before being spotted on Aug. 31, the animal shelter said on Facebook. Rescuers spent weeks trying to coax her toward a trap to capture her and bring her off the island.

Zaria was “very fearful” of the rescuers, the Humane Society of Midland County said in a Facebook post on Sunday, Dec. 11. The island was “marshy” and “uninhabited,” so rescuers worried the dog would “certainly die out there when winter hit.”

Rescuers finally succeeded, capturing Zaria on Sept. 21 and bringing her to the Clare County Animal Shelter, the organization said in a post at the time.

At the shelter, the Great Dane started her “slow recovery process,” the shelter said. Over the next month, Zaria gained almost 21 pounds, “very slowly started to decompress and start trusting people again,” the shelter said in an Oct. 20 update.

The director of the Humane Society of Midland County offered to foster the Great Dane and renamed her Zara, the organization said on Facebook.

“Zara, though stressed and fearful, settled in quickly,” the humane society said. The director soon began commenting that Zara was “the best dog she’d fostered, well behaved and so sweet… (she) just couldn’t let her go” and officially adopted the rescue.

Clare County is about 165 miles northwest of Detroit.