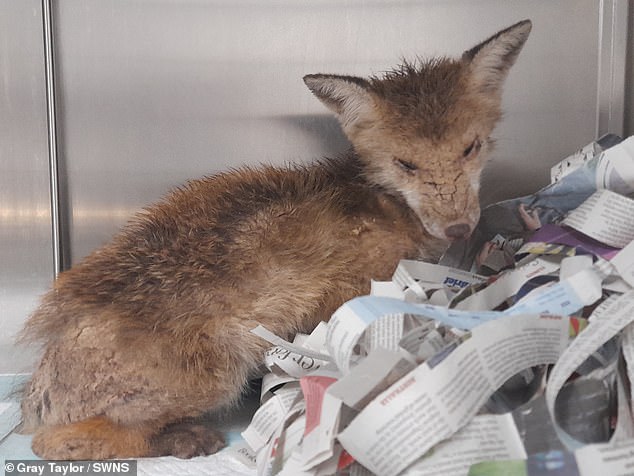 An animal rescuer who nursed an injured red fox back to health was shocked to discover his fur was actually white.

When Bo was brought into a wildlife rescue centre in the Wirral, Merseyside, last month, staff there initially thought his fur was brown.

But it turned out he was so dirty and unwell that it was hiding a secret – that he has leucism, a rare condition where his fur’s pigmentation is so light it appears almost white.

When he was brought into Pawprints Wildlife Rescue the poor animal could barely open his eyes as he was covered in scabs, but now just a month later he has been released back into the wild after making a full recovery.

Gray Taylor, from the centre, caught Bo in a trap after receiving a call from a local woman about a fox that had turned up in a state in her garden.

The 36-year-old spent three weeks brushing Bo’s fur and giving him eye drops and started to see the fox’s true lighter pigment fur as he returned back to health.

Gray, who runs the fox unit at Pawprints Wildlife Rescue, from the Wirral, Merseyside, said: ‘Bo’s eyes were shut by scabs.

‘He was a really sorry sight. He was withdrawn and behaving like a dog. As he got healthier he got more sprightly and would growl at me. This behavior is a good sign.

‘When Bo came in his fur was darker because of the dirt. But his fur coat is lighter. He’s a special fox.’

The fox unit received a call about Bo in November 2022, and chose to bring him into the centre when they saw the state of him.

‘He was in immediate need of help,’ Gray said.

‘If we hadn’t come, he would have died. He was covered in mange – a skin disease caused by mites. He was sitting up in about a week.’

When he was brought in Bo could barely open his eyes as they were covered in scabs, but after being given eye drops he recovered

Gray gave Bo daily brushes and eye drops to cure his bacterial conjunctivitis and began to see a change in his behaviour and fur colour.

‘At first when he came in he was amendable,’ he said.

‘But after a week he started to change and would look at me more warily which is a good sign.’

After three weeks with Gray, Bo was released back into the wild, ‘He shot out of the carrier,’ Gray said.

Gray works 24/7 to help care and rescue injured and poorly foxes in his area.

‘I’m able to deal with 70% of incidents outside but if they are too poorly we have to bring them in,’ he said.

2 thoughts on “Injured Fox Was So Dirty and Unwell His Fur Appeared Brown, But Was Actually White (PHOTOS)”