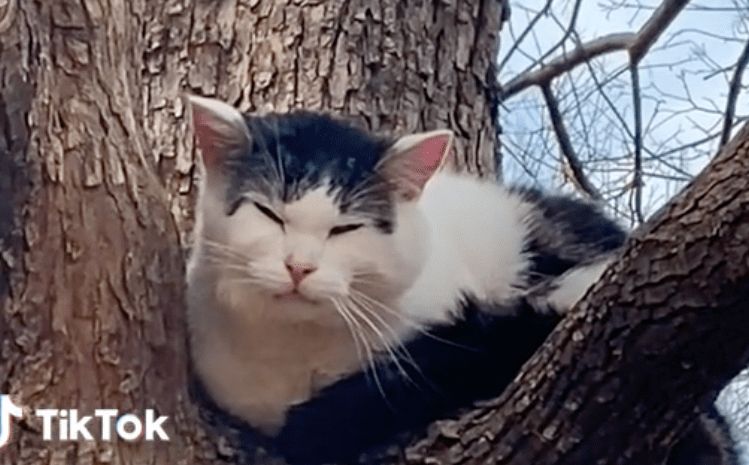 This is the story of Devito, a cat found extremely hungry, dehydrated, and suffering from frostbite hiding in a tree. PLEASE, PLEASE, PLEASE do not just dump your pets if you can’t take care of them.

It’s not always a happy ending for pets lost or cold-heartedly dumped—especially in the wintertime. Domesticated creatures need human intervention to live their best lives. So when this woman went on her regular dog walk and found a kitten meowing for help in the freezing cold, she was not about to leave him behind.

The kitten was curled up with his head tucked under his tail for any attempt at warmth. The woman was patient and gently cooed him into coming down from the tree. He was quick to trust her, but was too cold and frightened to make the jump. Eventually he gathered up the courage and followed her all the way to her car. The woman took her to the vet, got her checked, and gave her a warm home.

The sweet feline was treated for fleas, ticks, and heart worm, even though they felt like he didn’t have any. However, he was found with frostbite on the tip of his ears, and had to get them tragically removed. But now he is doing better that ever! Though the woman who rescued him is still on the look out to see if maybe he is just a lost pet and he has a family out there looking for him, she also is ready to give him a furever home. She says she has three options already lined up for the little fella that she named Devito and that “no matter the scenario, he’s going to have a happily ever after.”

The sweet bean went from alone, cold, and frightened in a tree, to being treated and guaranteed a warm and loving home for the rest of his life. Where’s the Christmas movie about that?!

@lnljs_clubhouse This is Devito- he was extremely hungry, dehydrated and suffering from frostbite hiding in a tree while we were on one of our dog walks. PLEASE PLEASE PLEASE do not just dump your pets if you cant take care of them. Also microchip them so if they accidentally get out they can be reunited with you! #lostpets #abandonedcat #foundcat #fostercats #catsoftiktok #dogwalker #GenshinImpact33 #winter #frostbite #rescuecat #rescueanimals ♬ the winner takes it all – november ultra