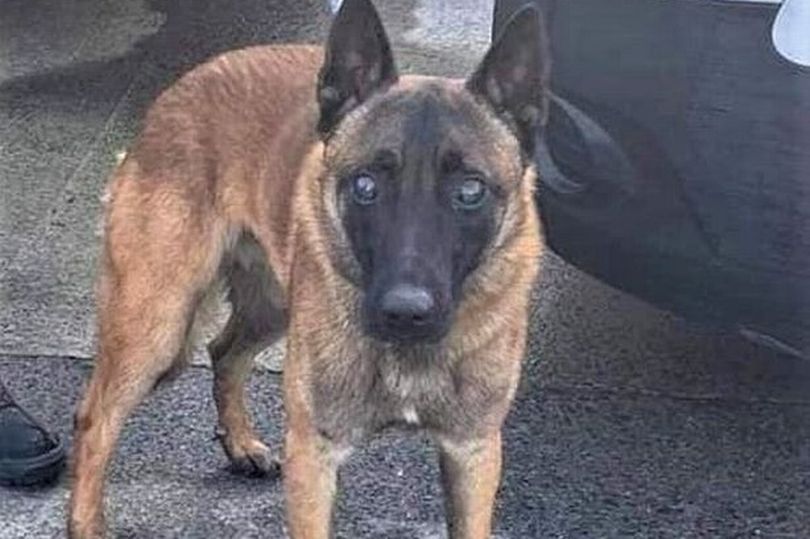 A fisherman working in a North County Dublin harbour performed a rescue mission to save a blind dog who had been dumped in the freezing water.

The dog, who has since been named Ash, was close to death but was fighting for his life in the water when he was found.

The one-year-old Malinois was discovered by a fisherman in Balbriggan Harbour in North County Dublin on December 8 when air and sea temperatures had reached freezing levels.

Ash was taken to Dublin County Shelter but was too unwell and overwhelmed by the noise. He was then taken to Star Rescue, Limerick, on December 11.

Eileen Treacy from the rescue told DogsLive : “We thought we’d heard it all but the story of Ash is incredible, remarkable and worthy of being shared because he is the dog who wouldn’t give up. Investigations point to him being dumped in the freezing waters of the harbour, another unwanted soul.”

Those looking after Ash believe he was bundled into a vehicle and taken to the town’s harbour, where he was thrown into the water at an area he couldn’t escape from.

“We believe he was thrown off the edge and left to drown, to die alone, terrified and confused on one of the coldest days of the year,” she said.

What Ash had to endure has sickened the team at Star Rescue, who deal with innumerable animal welfare horror stories. Shockingly, they say that animals being drowned is once again becoming prevalent across the island of Ireland.

Speaking about the poor animal, a spokesperson said: “We just couldn’t say no. We had survived so much and we will do all we can to get him through.

“We have tried to imagine just what Ash experienced on the day he was meant to die at sea. Just imagine him being blind, his whole world already a scary place to be. He spent the first year of his life depending on people around him for food, water, shelter, and safety.

“But, one day, he was bundled up into a car and this in itself must be a huge act of trust as a visually impaired creature.

“With the fullest heart, he got in. When the driver pulled up, he could no doubt hear the sea and smell of salt in the air. Did he wonder if he was going for zoomies on the beach? Well, that was not the end result.”

“We don’t know how long he was out there, or what kind of person could do this to such a soft and sweet animal. We can only imagine his fear with salt water stinging his damaged eyes, and his confusion with no idea which way was back to the land.”

Star rescue said they are “grateful” to the fisherman who rescued Ash, and “gave him a chance when the world was turning its back”. They said: “Ash is the dog that wouldn’t give up. And we won’t give up on Ash.”

The staff believe that Ash has something “very, very wrong with him”. This could be genetics, they said, or something much more “sinister”.

“His eyes bulge and shake. He is wobbly with a slight head tilt and has double cataracts covering his eyes. We won’t have the answer for a while as we need bloods and scans to come back,” they said.

On December 13, Ash’s health took a turn for the worst. Vets said that he succumbed to a bacterial infection as a result of having no vaccinations, the repeated stresses he has had to deal with and the relief of rescue, warmth and food.

However, he is fighting this with the help of the team around him.

Eileen, of Star Rescue, said: “It’s not the update we all wanted but Ash began to crash on Tuesday night and became very lethargic. He lost his spark and instantly we knew things were not good. He went downhill so rapidly that it left us all in shock.

“His blood work showed an infection has taken hold in his body and he is so vulnerable and struggling to fight it off.

“He had stopped eating and drinking and as a result was placed on drip antibiotics and fluid therapy. Ash is fighting for his life with our vets right now.

“We are fighting with him and for him. Gentle and loving Ash doesn’t deserve the life he has been dealt. He deserves to be in comfort with a loving family and we really hope we can get him there.

“For now, he is in the amazing hands of our vets and we couldn’t wish for better people to be caring for him.

“A dog’s life should be filled with happiness, love and experiences and we will not stand over any dog’s unnecessary suffering or pain.”