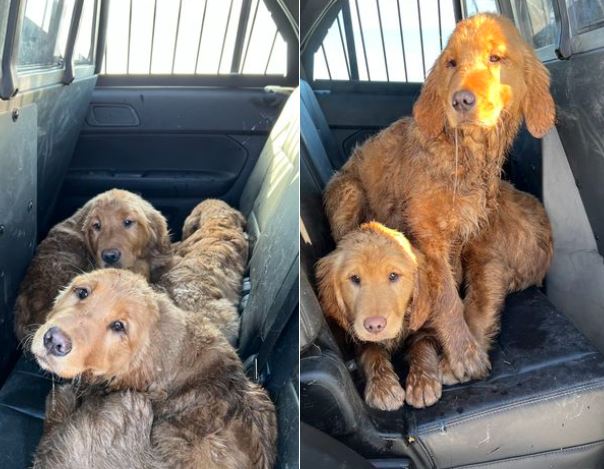 10 purebred golden retriever puppies were found abandoned near Highway 308 and Highway 503 on Friday.

RCMP, K9 Advocates and Rural Animal Management Services (RAMS) were able to rescue the dogs and provide them care.

“We’ve seen a drastic increase in animals being, what we think, is dumped. We think that may be the case here,” said Meghan Main, the owner of RAMS Animal Control.

Six of the three-month-old puppies, five females and one male, remain in RAMS care, while the other puppies are with K9 Advocates and Falcon Beach RCMP.

“We deal with it, maybe not daily, but weekly,” said Main, who believes many of the abandoned animals were initially pandemic adoptees.

“About a year ago, when people were going back to work, we noticed tons of people trying to surrender their animals. So our shelters became full and then that’s when we noticed the higher increase of animals being found and not reclaimed.”

She believes there needs to be stronger enforcement of the Animal Care Act to help curtail these types of incidents.

If pet owners are struggling right now because of the cost, time and responsibility to take care of the animals, Main encourages them to first reach out to a shelter in their area.

“Try to see if we can help you first.”

The six puppies in her care appear to be in good health and are scheduled for vet visits in the coming days. After that, they will be available for adoption.

“I hope this is the worst that they have to encounter and the rest is smooth sailing.”

If anyone has information about the dogs or the people who had them previously, they are asked to call RCMP.