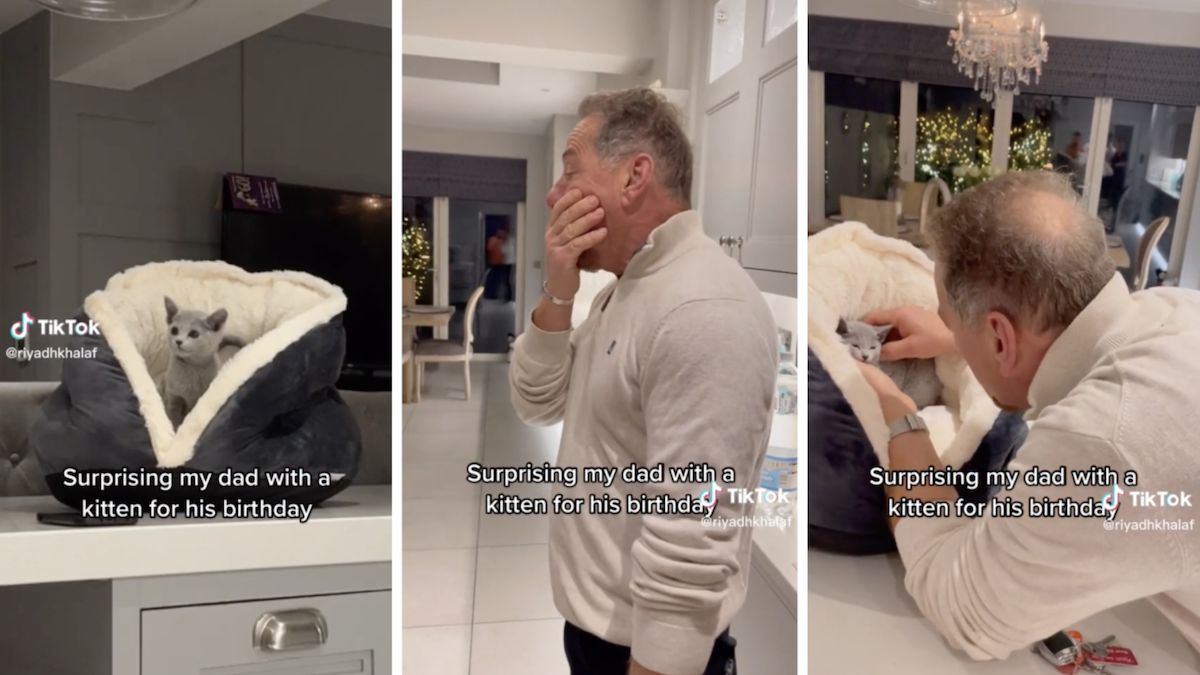 This son surprised his dad with a kitten for his birthday, and viewers cannot get over his wholesome and delighted reaction.

Pets bring an indescribable amount of joy and unconditional love into our lives. There’s nothing like having a furry friend to greet you when you get home after a long day, as shown in this viral video from TikToker and content creator, Riyadh Khalaf (@riyadhkhalaf). In the clip, Khalaf gave his father the surprise of a lifetime for his birthday when he discovered a kitten waiting for him at home, and the man’s giddy response is so pure it has hearts melting all over TikTok.

The clip opens with a shot of Khalaf’s father entering the kitchen before a tiny kitten snuggled in a small bed grabs his attention.

“Oh Jesus,” the man chortles, before the clip cuts to a shot of the adorable gray kitten. “Happy birthday, dad. It’s your kitten,” Khalaf says while filming his dad’s reaction.

With one hand covering his mouth, the man looks at the kitten in disbelief. “Oh my God! Oh Jesus,” the man trills delightfully.

When Khalaf tells his dad that the cat is his, the man immediately responds, “No way!” The following footage features a series of shots of Khalaf’s father gushing over his new furry friend, who’s already named Lulu.

“Don’t mess with my Lulu,” Khalaf’s father playfully announces, pointing toward the kitten. “I can’t believe we have a cat,” he says with a baffled expression as he holds LuLu in his arms.

“She’s nicer than yours. I’m sorry,” Khalaf’s dad sassily tells the camera. He puts LuLu back in her bed, asking, “This is a blue thing, is it?” before Khalaf confirms the cat breed as a Russian Blue at the end of the video.

“This is the most wholesome video I’ve ever seen,” one user commented.

“This is so pure,” echoed one TikToker.

“I feel safe here,” one viewer joked.
Based on their first meeting, viewers can probably look forward to a lot more cat content from ​​Khalaf and his dad.