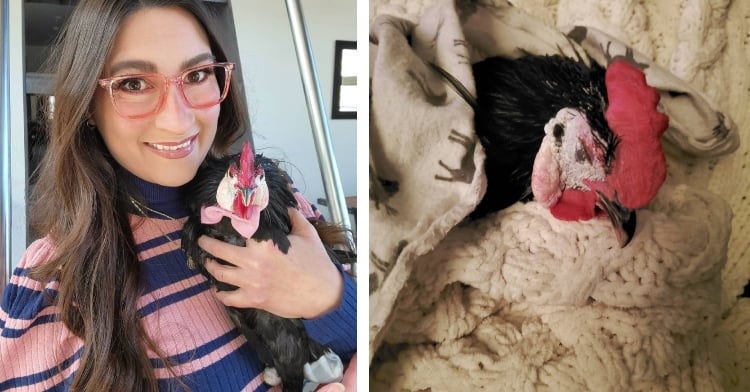 “Lipstick and chickens” aren’t two things that normally go together, unless you happen to be Jennifer Lewis!

That’s the name of Jennifer’s social media pages, which are rife with images of the “chicken photographer” and “tiny costume designer” looking subtly glamorous as she hangs with her flock. Recently, she shared the story of a rooster she rescued who has taken over her home in the cutest way possible.

Jennifer first heard about “Stumpy” the rooster via a direct message on Instagram. The male chicken had suffered frost bite and lost both his feet and lower legs, making it impossible for him to get around outside with the other birds. As a devoted chicken mom, Jennifer agreed to take the rooster, but she was unprepared for how injured he was.

“Frostbite is extremely common in chickens,” Jennifer explained. “He was in such bad shape, it broke my heart. I’d never seen anything like it.”

Jennifer took him in and renamed him Barth, then got to work nursing him back to health. From day one, she sensed a keen intelligence in the animal, and he seemed grateful to be with her. She decided Barth would be an indoor chicken, and he took to his new lifestyle in a heartbeat!

Today, Jennifer says Barth is totally spoiled! Once it gets late, he demands that she turn off the television and hit the hay.

“He’ll get cranky if we don’t give him a pillow or tuck him in his blanket,” she said.

Barth crows in the morning when it’s time to get up, but he’s gotten used to allowing his humans to get a few extra winks after his initial “alarm” goes off. He has learned to identify the sound of Jennifer’s truck in the driveway, and now he “goes berserk” whenever she gets home.

“He’ll follow me around,’ said Jennifer. “That’s when it really clicked for me that they’re so much more than we give them credit for.”

But that’s not all. Like any good chicken-toddler, Barth enjoys a little screen time each day. Jennifer puts “cat games” on her iPad so he can watch, peck, and have fun playing with his virtual pals.

Jennifer now thinks all chickens should live inside. We’re not sure about that, but they’re a lot more affectionate than we ever knew, that’s for sure!

Share this story with someone who loves chickens as much as Jennifer does… if you can find one.