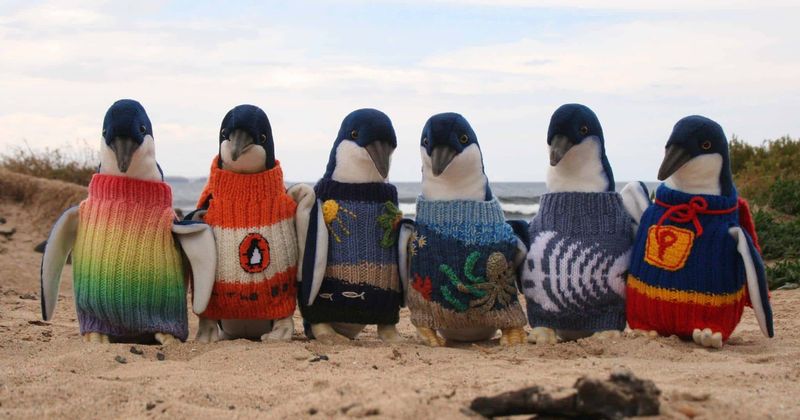 At 109 years of age, Alfred “Alfie” Date had more than enough reasons to spend the remainder of his days living his most relaxed life guilt-free. However, Date—the oldest person in Australia at that point in time—chose to use his free time putting out some good into the world and he found the most adorable way to do so. Putting his generous and still-nimble fingers to good use, the centenarian volunteered to use his knitting skills to help protect little penguins exposed to oil spills, which prevent them from staying dry.

According to Daily Mail, Date began knitting in 1932 when his sister-in-law taught him how to knit a jumper for his newborn nephew. Although he probably never expected to be able to one day use the skill to knit sweaters for penguins, life had other plans for him. Hours after moving into his new retirement home in Umina, on the central coast of New South Wales, he heard about the Knits for Nature program which invited knitting enthusiasts to make tiny jumpers for oil-spill affected penguins. “I think I’d been in here about 12 hours, might have been 13. The two girls (nurses) come in to me and say ‘We believe you can knit,'” Date, who passed away in 2016, said in a previous interview.

Launched by Phillip Island’s Penguin Foundation, the Knits for Nature program helps a big role in rehabilitating penguins exposed to oil spills as the jumpers act as a barrier to prevent the penguin from reaching its oily feathers with its beak before rescue staff is able to wash it clean. Aside from being fatal for the penguins when ingested, the oil also damages their delicate feathers, exposing their skin to cold temperatures. This leaves them cold, heavy, and unable to swim or hunt for food.

“So little penguin jumpers act as a rehabilitation tool. They are temporarily placed on the penguin and it stops them cleaning it off,” Penguin Foundation Officer Lauren Barker told the Australian Broadcasting Corporation in a 2019 interview. “The last oil spill happened here in 2001 and it affected 438 little penguins,” she explained. “Thankfully 96 percent of them were successfully released and penguin rehabilitation jumpers played quite a big part in that.”

Date got to work soon after hearing about the program, knitting adorable little stitch jerseys for the birds and making sure that his creations are of the utmost quality. “I like to make it without mistakes and I don’t excuse myself for doing it. (But) I think there is an excuse for a person who’s gone beyond the normal span of life,” he said. Date explained at the time that he has never been able to say no to helping those in need and often gets roped into projects for friends and family.

“The girls who used to work for me, they’ll tell you I’m a sucker. I can’t say no. It’s a good way of getting along in life. You make friends all the time but you don’t make a fool of yourself either,” he said. Although the Penguin Foundation was initially unaware of his oldest person in Australia status when he started contributing, the nonprofit made up for it by officially naming him their “most senior little penguin jumper knitter.” Danene Jones, a spokesperson for the foundation, said that they were privileged to have the centenarian aiding their efforts.

Phillip Island Nature Parks Wildlife Rehabilitation Officer Jodi Bellett revealed that the program has been an incredible success. “There’s been lots of patterns and amazing creativity that has come out of these donations. Some of them have been exuberant. We’ve had capes, neckties, and all sorts of things which are wonderful and really do well in the sales department, but not so much for our little penguins that are oiled,” she said. Explaining how the process works, Penguin Foundation Coordinator Jaquelina Alves-Ferreira said: “People email me and express their interest in knitting some jumpers for the foundation and I’ll send them the pattern, they will then send me the completed jumpers.”

“Once they’ve sent them I’ll sort them and if they are suitable for penguin rehabilitation, I’ll send them over to the penguin hospital. If they’re not suitable but they’re really nice and colorful then I’ll keep those for the kids or to sell them in the retail store,” she added. “There are a few fairy costumes that we’ve had sent in with little wings and tutus, and even come with a wand. My favorite is a teddy bear onesie with teddy bear ears and a little hoodie.”