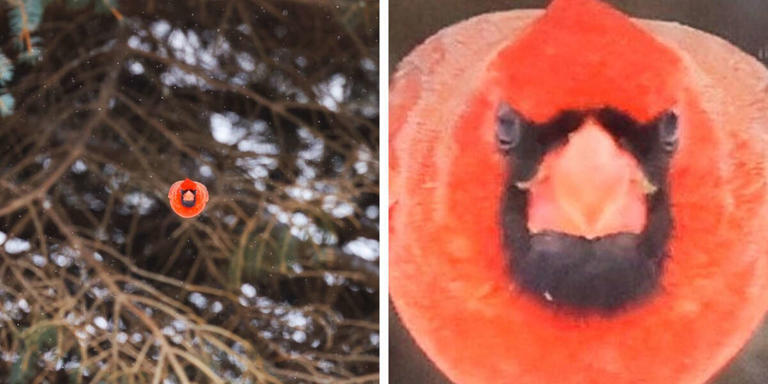 When Scott Taylor’s dad called to let him know that his bird feeders had recently been filled with all different kinds of beautiful birds, Taylor grabbed his camera and was there in a heartbeat. He adores photographing birds and was excited to hopefully get some memorable shots.

“I went to their kitchen window that looked into their backyard where the bird feeders are located,” Taylor told The Dodo. “I was amazed by the amount of male and female cardinals that were feeding on the feeders and in their trees.”

The bird feeders are located in the middle of the backyard between the house and the trees, and the birds spend all day flying back and forth between the feeders and the trees. Taylor was mesmerized by the cardinals and loved the way they looked hopping around in the dark green spruces. As he focused on one cardinal in particular, the little bird refused to sit still and jumped around until he decided it was time for another snack.

“If you have ever taken pictures of cardinals before, you know how fidgety they are,” Taylor said. “They are constantly jumping from branch to branch and never sitting still for very long. I am snapping pic after pic, and he flew off while I was taking the last picture.”

Taylor didn’t pay much attention to the photos he’d taken until he was home later on. He uploaded the photos onto his computer and started browsing through — and was completely floored by one of the photos he found. He’d captured the fidgety cardinal mid-flight, heading towards the bird feeder — and he looks exactly like the bright red bird from the popular game “Angry Birds.”

Taylor zoomed in a couple of times to get a closer look at the bird’s expression, and sure enough, there was his angry face staring back at him. It was the funniest, most stunning shot he’d ever captured, and he knew he had to share it with the world.

People quickly fell in love with the real-life Angry Bird, and Taylor’s photos have since been shared all over the internet. The comparison is just so perfect, and his grumpy little face has brought so much joy to people all over.

Taylor thought he was just going to be taking some fun pictures of birds that day. Instead, he captured an icon.