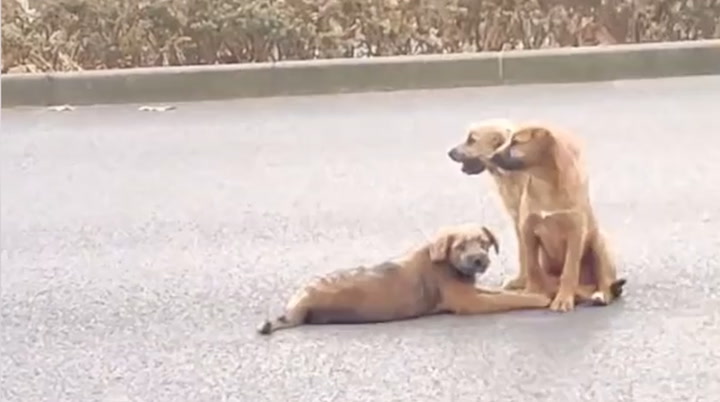 Two small puppies guarded a third injured dog after finding themselves stranded in the middle of traffic.

Footage filmed in Shanghai, China, on January 10 shows the injured pup in the middle of the road with the two small dogs nearby.

The injured one, who appears to be unable to move after being hit by a passing vehicle, can be seen dragging its hind legs, barely able to budge forwards.

But luckily, by its side are two other pooches whose dogged determination keeps passing cars at bay.

It is not clear whether the three puppies were rescued and removed from the road later.

The video was posted on Douyin – the Chinese version of TikTok – with the caption: “The dog is the most loyal friend of mankind, please be kind to it.”

Viewers were moved by the scene and praised the dogs’ ability to feel love and righteousness.

A social media user commented: “When I was young, I drove past two dogs crossing the road.

“One of the dogs was hit by a car, and the other ran back to rescue the injured dog. There is affection between dogs.”

Another one said: “Some people are worse than dogs.”

Last month, we reported that a lonely dog who has spent half of her life in rescue is ready to find her forever family.