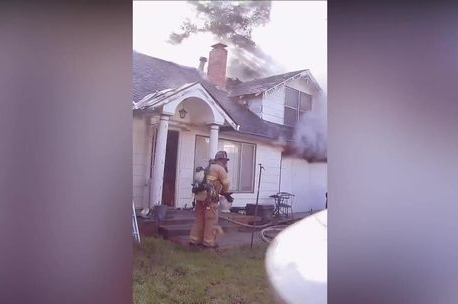 Fire crews responding to a blaze in Contra Costa County, California, US, had to saw off part of the garage door to enter and found 70 Pomeranians dogs and cats in need of saving

Firefighters called to a burning house were left stunned after they realised 70 dogs and several cats had to be rescued from a blaze.

Fire crews in Contra Costa County, California, US, were dealt with an unexpected challenge when a house fire broke out on January 17, which spread upstairs from the garage.

Rescuers were reportedly stunned when they found only three people in the home but as many as 70 Pomeranians dogs.

Helmet-shot footage shows first responders had to force their way inside the house by sawing off part of the garage door.

They used the garage hole to work the water hose inside and douse the violent flames which had engulfed the entire home.

Fortunately, only one of three residents had to receive medical treatment due to smoke inhalation.

All of the residents managed to self-evacuate and get themselves out of the fire as firefighters went about rescuing the animals.

The fire department indicated that apart from the heavy fuel loading and difficult paths of travel inside the home, one of the biggest challenges was rescuing all the pets.

“Ultimately they carried out dozens and dozens of dogs.”

The residents were keeping the dogs at home for a breeder, it later emerged.

Animal Services Lieutenant, Alana Weissman, confirmed the dogs’ owner later picked up the animals after they were temporarily taken into the custody of the Contra Costa County Animal Services Department.

Hill added: “The vast majority were Pomeranians. There were some other dogs mixed in there. A few cats in the mix. They were hard to inventory because they were all running around.”

Thankfully, with the help of animal control and local neighbours, all the animals were safely removed from the burning house.

An initial investigation had reportedly determined the fire was not suspicious in nature.

Hill believes the fire was started due to electrical issues in the garage.

However, after the residents watched their home go up in flames, firefighters revealed that due to extensive smoke and water damage which reportedly destroyed the home, the home is now uninhabitable.